Naked Streets - Do They Bring Chaos or Safety?

What happens to the places choosing to remove road signs, traffic lights, and markings? 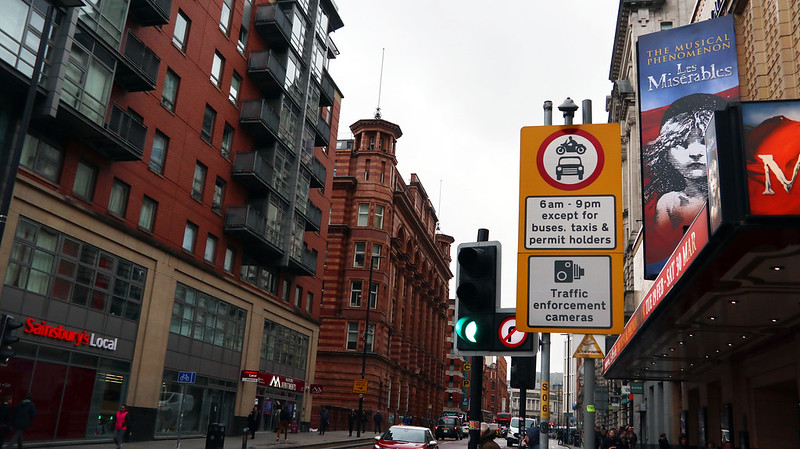 Over the last fifteen years, planners and civil engineers around Europe have been experimenting with a wholly different approach: getting rid of these signs all together. Not just signs, getting rid of everything. Traffic lights, pedestrian crossings, even the distinction between roads for cars and pavements for pedestrians.

Imagine the busiest, messiest crossroads you know. The one that just makes you sigh if you have to drive through it, shout as you drive through, and shudder if you walk past. Imagine all the lights and signs removed from that crossing. That’s what cities around the continent have been trying out.

Who stripped the streets?

The concept of the naked street is usually attributed to Hans Monderman, a Dutch road traffic engineer. Moderman didn’t like the way the government controlled a space that should be ours. By imposing travel restrictions, he felt they were restricting our rights and freedoms as well. 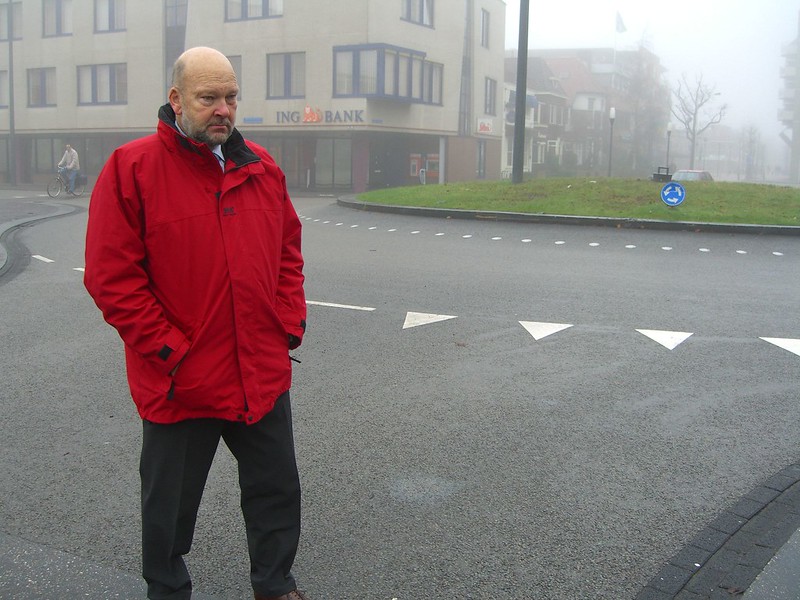 Instead, he envisaged a different way to conceptualise traffic as part of the spatial fabric of our lives. Instead of regulation and segregation, Monderman believed that we could allow people — drivers, cyclists, and pedestrians — to communicate with each other to negotiate their space, including who gets to pass where and when.

Why would anybody want to do that?

The philosophy behind the naked street is that it is essentially a shared space.

The space where we live, walk, drive, or cycle is shared by all of us, and is essentially ours. With that in mind, there are 2 main principles:

It sounds very different to the uber-organised world we’re used to living in. A lot of us are used to think that regulation is necessary so we can have order.

Shared spaces reject that. They want to have as little demarcation as possible between vehicles and pedestrians.

Take, for example, what happened in Poynton, a village-like town in Cheshire, England 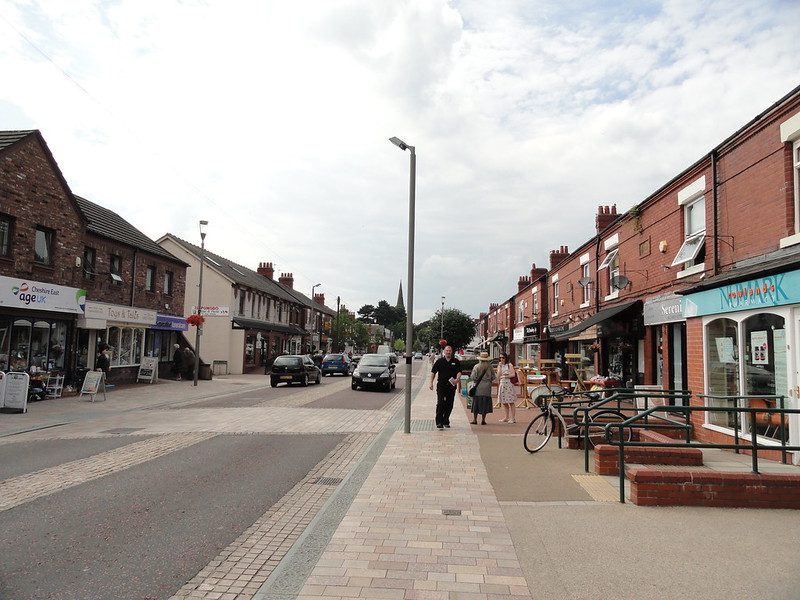 In Poynton, there was a busy intersection which connected the town to the highway and other nearby towns. It was notoriously busy — a site of traffic jams, accidents, and of course: road rage. 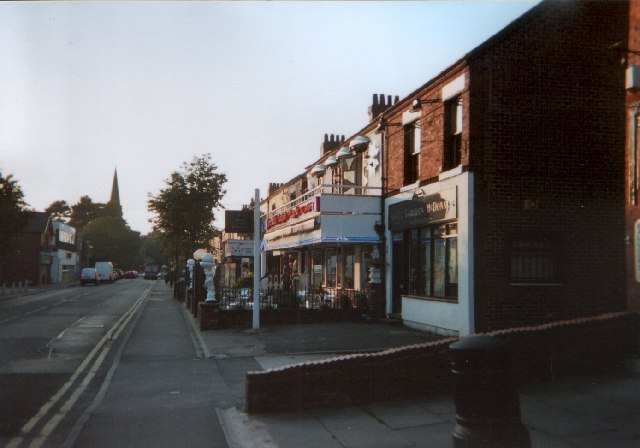 Before the renovations. "Park Lane, Poynton" by L J Cunningham

In a daring project, the Council decided to experiment with making the intersection into a shared space. They removed barriers between pedestrians and cars, removed traffic lights, removed pedestrian crossings and cycle lanes, and made the square into a shared, open, naked street.

The results were impressive. The average speed fell to 20 mph, travel time decreased and congestion improved. Safety too improved, with one minor accident in the frst 3 years compared to 4-7 in each of the previous three years. The scheme also led to economic revitalization, with 80% of retailers reporting increased turnover. 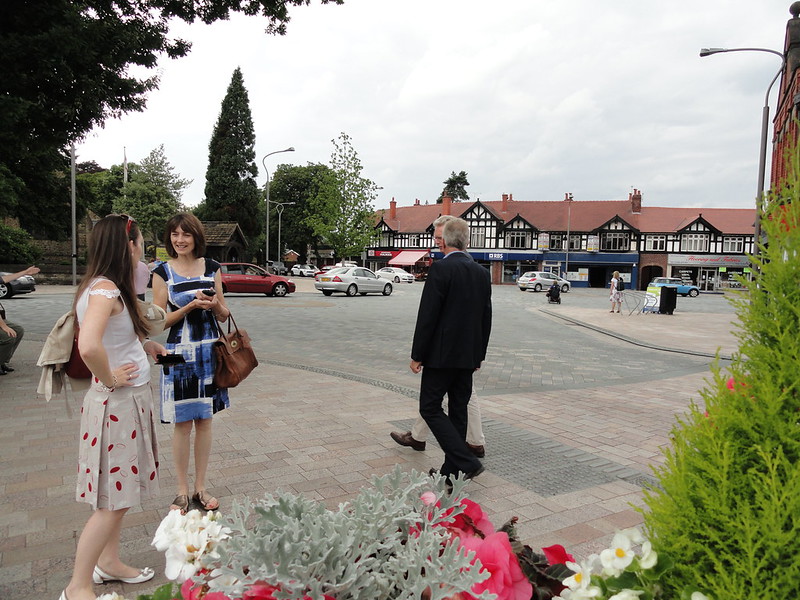 Some residents, understandably, had initially opposed the plans. But, once the new square opened, they were amazed by the results. 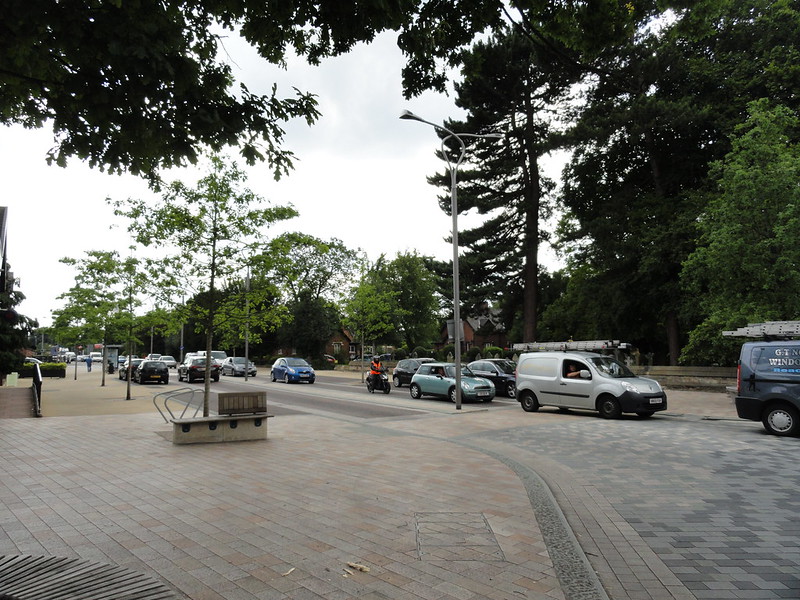 Or, take the example of London’s Exhibition Road 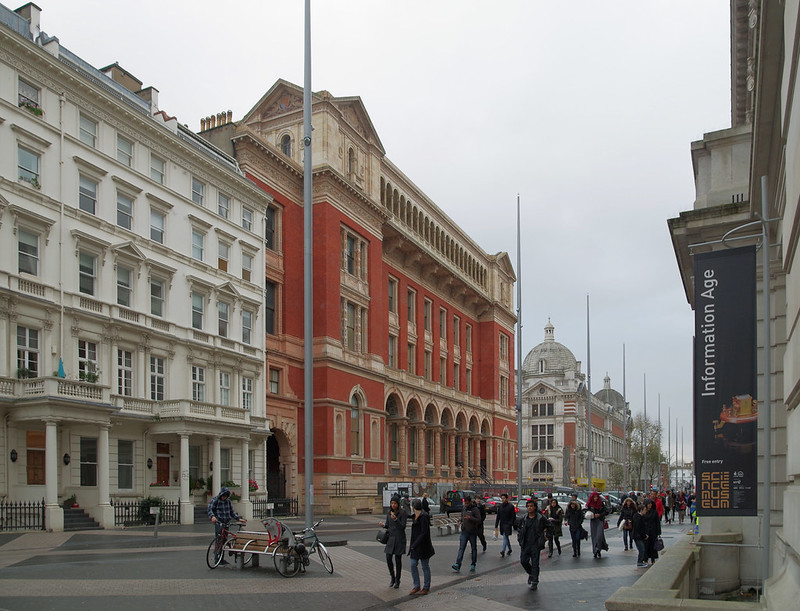 The situation with London’s Exhibition Road is a bit different. Exhibition Road, aptly named, is central to London’s cultural hotspots: it leads to the Royal Albert Hall on one end and is bordered by the Victoria and Albert Museum on one side, and Imperial College and the Science and Natural History Museums on the other. Collectively, these attractions bring in more annual visitors than Venice does.

You’d think that a road like that, so central to London’s cultural identity and tourism, would be nothing less than red-carpet-like. But, it had been largely neglected for years. It was notorious for traffic jams, difficult pedestrian crossings, and the impossibility of finding a parking spot. Its overall appearance and atmosphere probably did more to contribute to the stereotype of England being grey and gloomy than it did to welcome visitors and highlight its cultural attributes.

That’s why, when it came time to sit down and discuss renovations, it wasn’t just ease of access that was on the table. The designers of the new Exhibition Road wanted something to make traffic control easier, yes, but that’s not all they wanted. They also wanted Exhibition Road to live up to its symbolic position and cultural importance. They wanted it to invite people in and to emphasise the shared and central value of the place. 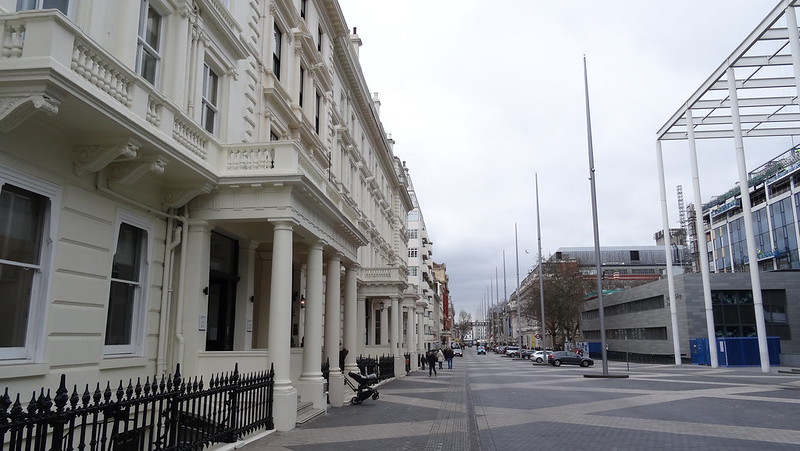 Hence: Bring in the naked streets.

Barriers between pedestrians and cars were, as with Poynton Square, removed. There are some suggestive guidelines for parking spots, but otherwise, pedestrians, cars, and cyclists have the freedom to navigate however they please, and to negotiate with one another to share the space.

The result was an improvement in the flow of traffic, reduced conflict rates and a better pedestrian experience. The new design highlighted the road as an attraction in and of itself, rather than merely being a thoroughfare, and the project received a Royal Institute of British Architects (RIBA) award, a European Prize for Urban Public Space Special Mention, and the Civic Trust Award.

Another nice example is Elwick Square in Kent, England 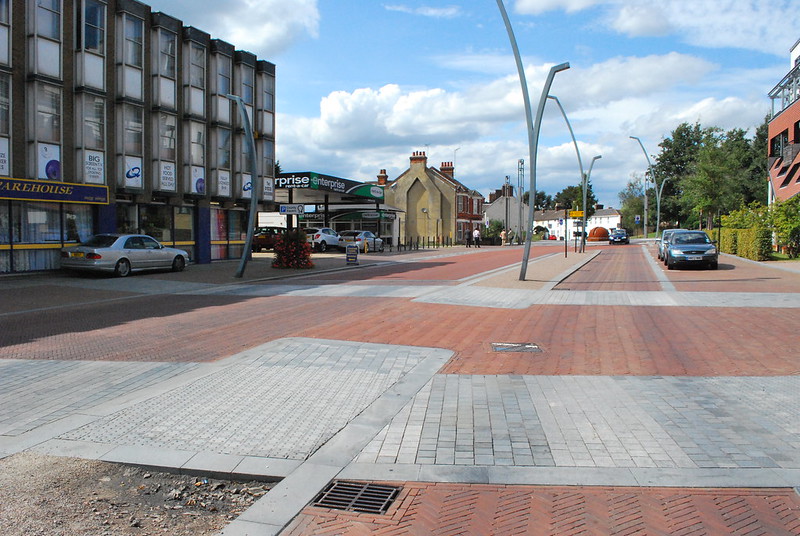 Elwick Square, in Ashford, also tested out the naked streets. They’ve given no priority to cyclists, pedestrians, or motorists. Some cars do u-turns, others stop on the sides, but there are no signs indicating what they should or shouldn’t do. 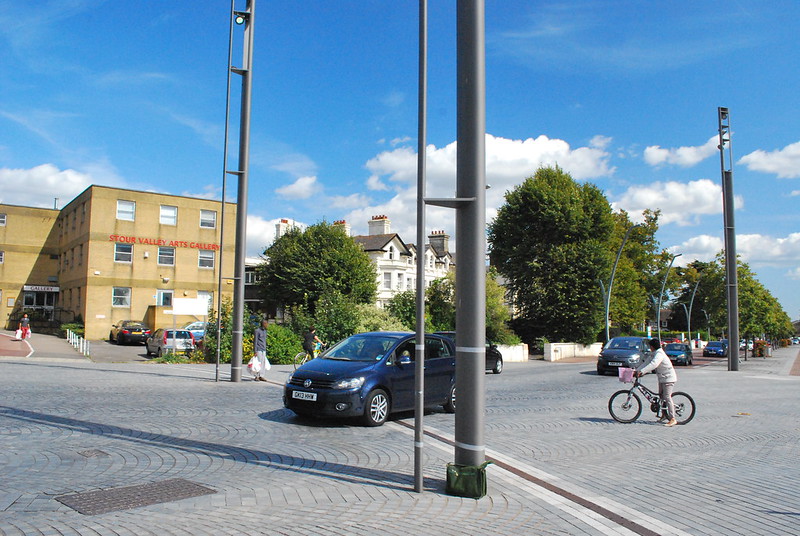 Some pedestrians have said they feel a bit hesitant when crossing. But the numbers showed that accidents had drastically gone down. Motorists and pedestrians make eye-contact with each other to manoeuvre their way around the space which, in theory, should encourage a sense of community. 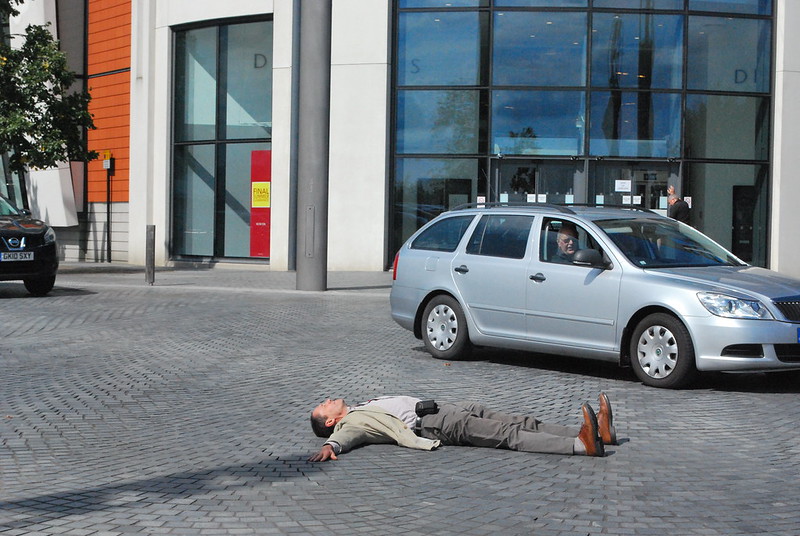 How has it worked out overall?

Many of the spaces that have implemented naked streets have seen reductions in vehicle speed, road accidents, and pedestrian incidents. As well as that, they’ve seen increases in the smooth flow of traffic.

It’s not all good news however. With more naked streets in the wild, a number of criticisms of the concept have emerged.

The strongest criticism has come from organisations representing blind, partially sighted and deaf people. Naked streets often mean the absence of familiar features (such as railings, kerbs, barriers and separate surfaces) that pedestrians with disabilities rely on to safely navigate. The UK’s Guide Dogs for the Blind Association’s “Say No to Shared Streets” campaign has been supported by more than thirty other disability organisations.

Another concern is that when pedestrians, cyclists and drivers interact with the space, the law of the jungle prevails. In streets with high volumes of traffic, pedestrians may be more likely to give way to vehicles than vice versa. The British Transport Research Laboratory found that below flows of 90 vehicles per hour adult pedestrians were prepared to mingle with traffic. But when flows reached 110 vehicles per hour, they used the width between frontages as if it were a traditional road. Many pedestrians, including a markedly higher proportion of vulnerable people, have found the new design more intimidating.

The attribution of the naked streets concept has also generated some backlash. Some critics argue that naked streets have been around for a long time outside European contexts. In some places, it’s the norm not to have road signs and regulations, and people are comfortable sharing their streets that way. These critics are basically saying that advocates of naked streets have taken something that already exists, and re-packaged it as a European invention.

Are naked streets the future?

Well, it’s probably too soon to tell. Yes, they’ve worked well in numerous places, but there’s also been concern from citizens. In all likelihood, some experimentation is still needed to see how and where naked streets can work best, to better manage our spatial communities.

In terms of accountability, having rules and regulations probably makes it easier when accidents happen, to find out who was in the wrong. But, even that is based on what we’re used to with the legal system handling regulated streets. A shift to more naked streets would also require a shift in how driving lessons are taught in the first place, and on how the laws surrounding the streets are shaped and applied.